Torchwood actress Eve Myles who plays Gwen Cooper on the show has confirmed through an interview with WalesOnline that shooting for Torchwood series 4 starts in January, and it will begin in America, or possibly Canada. She isnt sure yet...

"We start shooting the new Torchwood in January. We’re not sure yet whether we are going to be living in Los Angeles or Canada but Torchwood is already very popular in America and I had no idea exactly how big it was until I was in Washington DC and I saw myself on the back of a bus. Weird. It’s got an absolutely massive fan base, it’s been the number one sci-fi show for the past three years out there.

“I haven’t managed to see John much but we get on so well that as soon as we start working it will be like we’ve been together for weeks.” 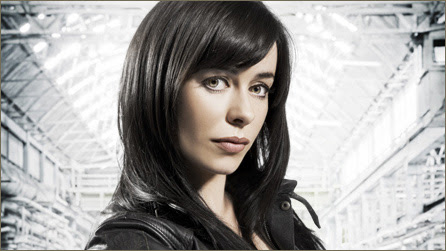 EDIT: We should point out that Russell T Davies and BBC Wales have both previously stated that filming will continue on in Wales, so parts of the interview with Eve Myles may have been misquoted by the interviewer, particularly the bits about the 7 month shoot in America/Canada.

RTD previously stated: "We will still be shooting it in Wales. There’ll still be Cardiff action on your screens but the story now takes the team to America and to some other countries as well.”

This is made more dubious by the fact that although Eve knows when shooting will begin, she doesnt seem to know where, and by the fact that the BBC implied much of the overseas stuff will be shot in Wales but made to look like other countries. Make of this what you will. The full interview can be seen HERE
Posted by The Doctor In The TARDIS at 18:29

Email ThisBlogThis!Share to TwitterShare to FacebookShare to Pinterest
Labels: Torchwood