It's always the same. One minute we're complaining that there is nothing to report on, the next minute RTD gives an interview and we are full of interesting tidbits of information to relay to you.

Talking again about what to expect in the new series of Torchwood, the genius that is Russell T Davies has done what he does best: giving lots of information, without giving anything at all away.

Rather than bombarding you with lots of words (we all know he can talk for Wales), we have broken down what he said, and all the relevent fun bits, into little sections. 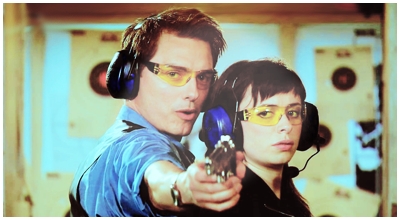 THE HUB - Gone
"It's funny, in Children of Earth episode one I destroyed their base, and ever since people have been saying, 'Have they got a base?', No, I destroyed it! And thats the point. They won't be digging up the Hub. They won't be finding a new Hub. Torchwood is their designation now. It's who they were and what connects them."

TORCHWOOD INSTITUTE - Gone
"Time has passed since Torchwood was last on air, and that's reflected in the series. In episode one, Torchwood has been forgotten. It was destroyed. Then events start to draw everyone back together again, which gives the chance for american characters to come in and say, 'What was Torchwood?' So Torchwood is now like a legend. It's the one thing that binds Gwen and Jack together, and then mysteriously, this new set of events sets things in motion."

GWEN'S BABY - Possibly Gone
"Maybe (Gwen still has a child), or maybe the plot is all about intergalactic baby stealers! Actually, don't write that, people will believe it."

THE RIFT - Gone
"I like to think that when Steven Moffat so thoughtfully closed all those cracks in the universe, the Rift in Cardiff closed up at the same time. I used to wonder what the hell happened to that Rift and now it's all solved. When I watched those cracks seal up I was like, 'Oh, thank you.'"

IANTO - Gone
"Permantly dead. Yes he is, bless him. I saw an interview with Gareth David-Lloyd recently where he was saying, 'That's enough, thanks'. Leave him to get on with his career!"

WALES - Almost Gone
"It's funny, the word 'international' is the thing everyone seems to have hooked onto. There's gonna be a bit of [Wales] in this series. I can't wait to see how that plays in America. It's not one of those dramas that suddenly flies off to China for no reason. There are proper reasons, and people getting separated across oceans. There's some really interesting global stuff about the story. They're not swanning about for the sake of it."

So what do you think of these changes to the show then? Are they good moves, or detrimental to the show? Let us know below and if you want even more, you can read the full article in this months SFX magazine.
Posted by The Doctor In The TARDIS at 15:44

Email ThisBlogThis!Share to TwitterShare to FacebookShare to Pinterest
Labels: Torchwood