Here is the cover for issue #446 of Doctor Who Magazine:

The magazine is out on Thursday 5th April 2012.
Posted by poprockgeek at 16:08 No comments: Links to this post

Email ThisBlogThis!Share to TwitterShare to FacebookShare to Pinterest
Labels: Doctor Who, Doctor Who Magazine

The first trailer for Series of Doctor Who was shown to fans over the weekend at the official convention. This morning the BBC made it available for the rest of us to see. Enjoy!
Posted by poprockgeek at 12:23 No comments: Links to this post

Email ThisBlogThis!Share to TwitterShare to FacebookShare to Pinterest
Labels: Doctor Who, Series 7 The BBC have today announced that the Doctor's new companion will be Jenna-Louise Coleman.
Here is part of the press release (which you can read in full here)
Jenna-Louise Coleman has beaten hundreds of hopefuls to become the new companion to Doctor Who, it was announced today by Steven Moffat.
Twenty-five year old Jenna from Blackpool will star alongside the 11th Time Lord, Matt Smith, to mark the biggest year in the show's history.
Best known for her roles in Emmerdale (Jasmine Thomas) and Waterloo Road (Lindsay James), Jenna will replace Karen Gillan when she and Arthur Darvill bow out of the show in a heartbreaking departure after one final series of rollercoaster voyages later this year on BBC One.
Jenna says: "I'm beyond excited, I can't wait to get cracking; working alongside Matt I know is going to be enormous fun and a huge adventure."
The Doctor will meet his new friend in a dramatic turn of events as the show builds towards its enormous, climactic 50th anniversary year - full of thrills, adventures and big surprises. Series seven is currently filming and comprises 14 big, blockbuster-movie episodes - each a brand new epic adventure featuring new monsters and some familiar foes as you've never seen them before.
Lead writer and Executive Producer, Steven Moffat, says: "It always seems impossible when you start casting these parts, but when we saw Matt and Jenna together, we knew we had our girl. She's funny and clever and exactly mad enough to step on board the TARDIS.
Jenna-Lousie's character will appear for the first time in the 2012 Christmas Special.
Congratulations Jenna-Louise & welcome to the show.
Posted by poprockgeek at 13:10 No comments: Links to this post

Email ThisBlogThis!Share to TwitterShare to FacebookShare to Pinterest
Labels: Cast and Crew, Doctor Who, Series 7 Announced for release on June 18th is the Season 11, Jon Pertwee story, Death to the Daleks.

An inexplicable power-loss strands the Tardis on the sinister planet Exxilon where the Doctor meets an expedition from Earth seeking a rare mineral that can cure the virulent space plague that threatens all human life throughout the galaxy. Nearby Sarah discovers a mysterious Citadel but is captured by the savage Exxilons who prepare her for sacrifice…

The Doctor must uncover the secrets of the ancient Exxilon City, locate the source of the power-drain, save Sarah and help the Earth expedition. But his plans are threatened by new arrivals on the planet – the Doctor’s oldest and deadliest enemies -the Daleks!

No bonus feature details have been announced yet and the artwork is still TBD, but we will update with news as and when we get it.

For the latest forum review I leave you in the very capable hands of @ChrisNewman1972, who on the forum this week has been discussing and reviewing the first in the Doctor Who Unbound series, Auld Mortality. Over to Chris....

One thing I love about our little forum is that we are pretty good for not getting our knickers in a collective twist over things. However if you are ever wondering what it is like to inflict mass chaos on an otherwise strictly ordered and hierarchical society then of the ways that you can amuse yourself is to go on to any other Doctor Who forum and post a statement like...

"X is absolute rubbish because we saw him take an aspirin and we know from Y that a Time Lord is allergic to aspirin."

This is even more fun if Y is something on the margins of Doctor Who like a story from the 1978 annual or a TV Movie.

I think there is a danger (as Star Trek found in the late 90s to its cost) of being too wrapped up in continuity, and the bods at Big Finish agree. They have created a range of stories called "Unbound" and they advertise them as...

"New Doctors. New Dimensions. A series of plays outside of accepted Doctor Who continuity with actors new to the role of the Doctor in situations that might have been, if only..."

If it sounds slightly weird then let me tell you, they have some serious writers and serious actors playing the Doctor. This is a little untapped corner of the Whoniverse but I promise you these stories are little gems! As I haven't done a review for a while, I thought this might be something you may want to take a look at. As weird as it is to listen to different Doctors play the role, these are (in my opinion) some of the finest things that Big Finish have done and all that is asked is that you cast off the chains of canon and embrace the anarchy.

The first in the series is a play called "Auld Mortality" and has Geoffrey Bayldon giving a performance that will tickle your heart as it is so reminiscent of Hartnell's First Doctor. The synopsis is as follows...


"What if... the Doctor and Susan had never left Gallifrey?

In a marble mausoleum, deep in the cisterns beneath the Capitol, Gallifrey's favourite author faces his ultimate destiny.
Who is the woman who claims to be his grandaughter?
Who is the sepulchral figure in robes of night?
Which path should Hannibal's army take to Rome?

And on a snowy mountain high in the Alps, the Doctor remembers the ultimate question: What if he and Susan had ever left Gallifrey?"

You will probably have gathered that I am something of a fan of the Unbound series and a great part of that affection is due to this story. It is written by classic series writer Marc Platt and let us not mess about here, this guy can really put a tale together! It has a slightly ghostly feel to it and the manner in which "The Doctor" is introduced immediately throws us "off centre". Yet whilst so much of the idea and underlying plot is based around "a new doctor" without the constrains of canon, the story very cleverly uses the familiarity of Doctor/Susan relationship to give the listener some frame of reference to warm to the characters and to care about what happens to them.

Geoffrey Bayldon is one of those actors whose voice you will recognise immediately and it is no coincidence that he was one of the actors that JNT looked to replace William Hartnell with in The Five Doctors (he eventually went with the late Richard Hurndall). Bayldon is totally magnificent and I found myself wondering what type of Doctor he would have made on screen. His relationship with Carole Ann Ford is pitch perfect from the start. As with all Big Finish Productions, the SoundScape is wonderful and the production values are high.

But all that apart, what you have here is a brilliant story that operates outside of the normal Doctor Who universe. Bayldon's homage to the First Doctor works so well that half way through you can readily accept him as our Time Lord hero. Platt's storytelling and good supporting actors make this a fabulous little tale and well worth an hour and a half of your time.

I have just been on the Big Finish site and they are selling this story for a ridiculously cheap £5 - for less than the price of a Big Mac Meal and a Latte, you can have this wonderful curiosity. And I guarantee that if you buy this, you will immediately return and buy up the whole series which is available for the ridiculous price of £25.

The concept does require a leap of faith on behalf of the listener, but make that leap and you will be richly rewarded.

Email ThisBlogThis!Share to TwitterShare to FacebookShare to Pinterest
Labels: Audios, Doctor Who, Reviews

How To Get Your Who Fix

There are so many ways that you can now keep up with the all the latest news, reviews and spoilers that The Doctor In The TARDIS are bringing you every day. 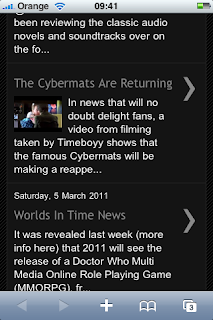 You may or may not be aware that this blog went mobile a few months back, making viewing all the news on the move a much easier and more streamlined experience, meaning you never have to be more than a few clicks away from all the latest updates.

For those of you with Facebook accounts, you can get updates from us direct to your feed by following us at www.facebook.com/thedoctorinthetardispage and 'liking' us. All the news from here is posted there daily as well as discussions and polls on all things 'Whoniverse'.

We Have A Forum

Come on over to the forum, grab yourself a username and tell us all your thoughts and opinions on the show past and present, as well as discussing all the spin offs, merchandise, news and reviews and competitions. We have sections covering every inch of Doctor Who, Torchwood, The Sarah Jane Adventures and K9 with over 50,000 posts in nearly 2000 topics you are sure to find something to discuss, so come and join us HERE

If you are a Twitter user than you can get updates from the blog and forum direct to your feed as soon as they are posted. We also use the Twitter feed to interact with fans around the world and find out your thoughts on what is going on in the world of Who, as well as holding the occasional quiz or poll. You can find us on Twitter by clicking @TardisSpoilers and following us there.
Posted by The Doctor In The TARDIS at 13:34 No comments: Links to this post

With last months revelation of filming for Doctor Who in Spain, this week has brought around some extra tidbits. Episode 3, which is being penned by Being Human creator Toby Whithouse, is set to be a Western themed story with a half human-half cyborg villain.

Filming on location has been taking place just north of Almeria in a place called Oaseys Theme Park, which is an area set up to look like the old American West and has been used for numerous films in the past.

Casting confirmed for the episode included Ben Browder, known to many for his role in Farscape, Rob Cavazos, Dominic Kemp and Adrian Scarborough, start of Upstairs Downstairs, Miranda and Gavin and Stacey.

Not much is known about what characters they will play but Scarborough and Kemp have listed on their CVs the names Kahler Jax and Kahler Mas respectively.


If you were hanging around our Forum yesterday then you may have seen some of the updates from this weeks filming in Spain. A full collection can be seen on the forum, but a sample few are below. Here's the cover for issue #445 of Doctor Who Magazine.

A close look at the cover confirms that Series 7 of Doctor Who will indeed be filming in Spain.
What do you think of the latest cover & the news of filming taking place in Spain?
The latest issue is published in the UK on Thursday 8th March.
Posted by poprockgeek at 16:37 2 comments: Links to this post