As we have mentioned before, despite certain media outlets claiming that the sky is falling in on Doctor Who, the BBC itself are quite happy, and plans are already underway for series 7 of the show. Last night, at an ungodly hour when we were trying to get our beauty sleep, we got an interesting email about River Song and her place within the future of the show.

Because Alex Kingston who plays the mysterious time jumper lives in California, efforts have been made to make sure that the shows producers secure her availability for series 6. This is already in the bag we are told and she is already signed on for all the relevent episodes of the next series.

But now for the interesting part. The part that is either going to make you incredibly happy, or incredibly annoyed... 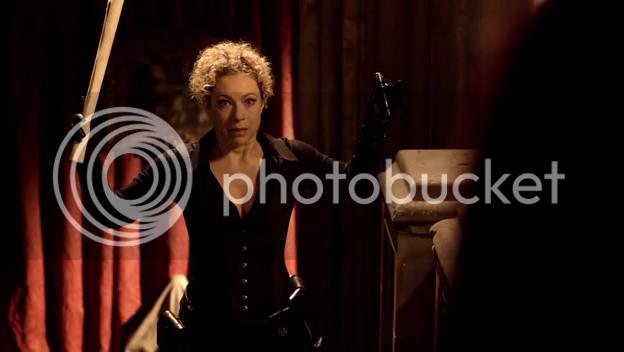 According to our source, Steven Moffat has been having 'secret' meetings with Alex and her agent about bringing her into the show full time for series 7. Alex, who loves working on the show has apparantly taken some persuading. Not because she wouldnt love the job, but because spending 9 months filming in the UK is a big commitment when she lives so far away.

It seems that Moffat though would have the gift of the gab, because earlier this week her Californian home was put up for sale and her team was said to be looking for a a base for her in Cardiff Bay, near to where the show is filmed.

Obviously if all this is true, then it will be a while before the BBC confirms anything, and as always we want to point out that this can only be treated as speculation for the time being, but it would certainly seem that we will be seeing a lot more of River Song in the future. How do you feel about that?
Posted by The Doctor In The TARDIS at 09:48

Email ThisBlogThis!Share to TwitterShare to FacebookShare to Pinterest
Labels: Cast and Crew, Doctor Who, Rumours